This step by step guide contains instructions for the A&E awning. Other brands are similar and all precautions apply.

There is considerable stored energy in the springs that can cause serious injury - if you are not completely sure of your abilities DO NOT attempt to repair the awning. Most RVawning repairs are best left to a competent RV technician!

The content of this webpage is for informational purposes only. I wish to stress again that when attempting RV awning repair the spring pressure must be controlled at all times.

Release the travel locks on the awning arms and position the cam lock to the roll down setting. Roll the awning out about a foot or so. If the cam lock mechanism is not working, you will have to prop the awning in this position with a short board. 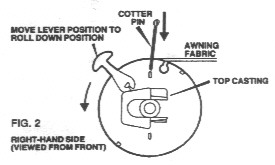 At both end caps, there is a hole through which a cotter pin is inserted to lock the spring tension. The inner shaft must be rotated until the holes line up, insert the cotter pin and bend the ends to prevent it from slipping out.

Remove the two lag bolts that hold each of the rafters to the top of the trailer.

Remove the screw at each side of the awning fabric that holds the fabric in position on the awning rail. The complete awning is now ready to remove from the coach. Have two sawhorses setup at the proper distance apart to place the awning on. The awning rail must not be crimped or flattened out or the awning cord will not slide out. There is a special tool to straighten the awning rail if this is the case.

Caution: care must be taken to control the spring tension at all times. Considerable force is stored in the spring and this force is easily able to break a wrist or inflict a severe cut. 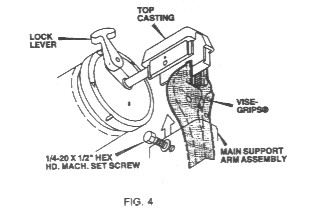 If the awning fabric is to be removed, repeat this procedure on the other end of the awning to remove that torsion assembly.

The torsion assembly consists of the spring, end cap and cam lock mechanism. It is held on to the awning tube by two rivets that must be drilled out. First mark the position of the cam handle on the awning tube so that you can replace it in the same position. Using a 1/8" drill bit, drill out the rivets and remove the end cap/torsion assembly.

The end cap (with the cam lock mechanism) is attached to the torsion shaft with pins that must be driven out to replace the cap. Drive out the pin with a hammer and punch and replace the cap with the new one. Reinsert the pins.

If you are replacing the awning fabric with a new one, it helps to lay out the old fabric in such a way as to protect the new one from damage as you "thread" it on to the awning tube. A few helping hands are required and some patience is involved. Take care not to rip the fabric as you are sliding it into the awning tube. If you carefully file down the sharp edges on the tube this will help considerably. Once the fabric is in place make sure it is centered on the tube and tuck the cord ends into the tube.

Install the torsion assembly and line it up with the marks that you made when disassembling it. Rivet the assembly in place. 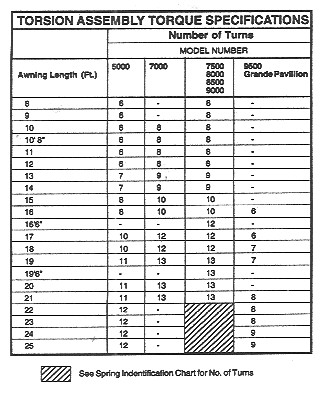 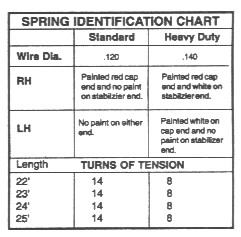 The mounting screws for the awning are rusted off and the area where they screw in to seems rotten. Anybody have any ideas on how to fix ? Thanx JK

Basically, and you may chose to modify it a little, is to drill out the holes large enough to find good, clean wood all around. In your case, maybe 1", maybe 1 1/4", maybe larger. Then, take a length of dowel rod as long as the frame is thick, put some grooves in it to help the glue hold, and glue the dowels in the hole with some quality waterproof glue. After it sets up, drill new holes for your new mounting screws (original size), and you're all set.

Now, in your case, I don't know if you want to drill through the siding with that large of a hole. You may want to pull the siding back if you can. It's up to you. In any case, when installing the new bolts, seal the area with silicone. As I said, you may want to modify it to suit your needs, but you get the general idea.

Good luck, and let us know how it works out for you.

RV maintenance is a subject that every RV owner can relate to! These articles will help you "do-it-yourself" with confidence and with a logical place to start! Each catagory has a list of articles relating to that area. Enjoy! Read now!

Information presented on this site is for educational or entertainment purposes only. You are responsible for your own actions should you use any information found on this website.

Disclosure: Advertisements are placed on this website to offset the cost of maintenance and to keep this site free for everyone to use. Owners of this website will receive compensation for products and services purchased through featured advertisements. All claims of actual user results should be considered atypical.